Day 2 we finally had all out friends together! With 6 people piled into our rented mini van, we headed out to the Red Rock Canyon National Conservation Area.

Half of our group went to climb Cat in the Hat, a 5 pitch trad climb at Mescalito.

K in Ohio, S, and I spent the day at Panty Wall, where there were many single pitch sport routes for us to climb! 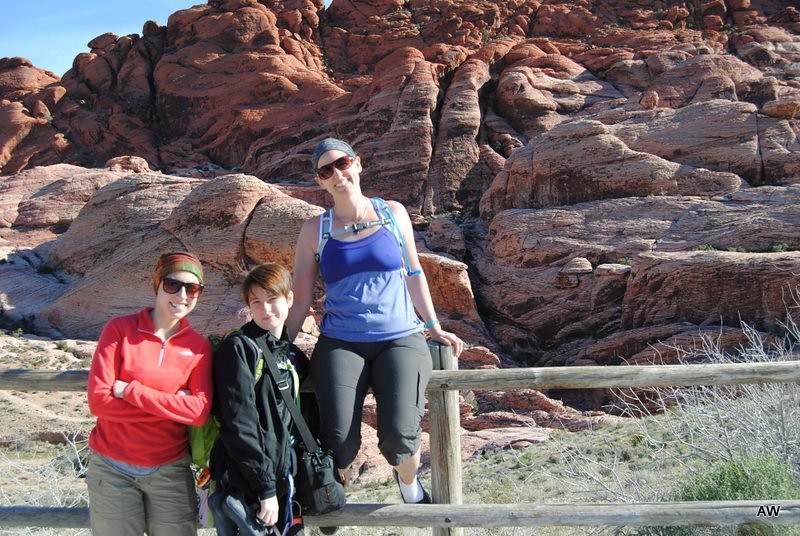 Just the girls! Photo op before we split up for the day.

The approach seemed much easier than the previous day. It was about half the length. And I had learned not to wear so many layers! The path itself was a bit easier too. There was a defined, well marked trail. Whereas the path to Physical Graffiti was less defined and more scrambling. After a tough previous day, I was glad for the easier hike. Also, there was little chance of getting lost, because you could see the parking lot from the wall!

Panty Wall was one of my favourites because the routes were the type where I excel. The routes were not overhanging. There were lots of good crimps. And the climbs relied a lot on taking your time and balancing. Awesome!

I wish I could remember exactly which routes we climbed that day, but based on reading The Crag, I think we sent: 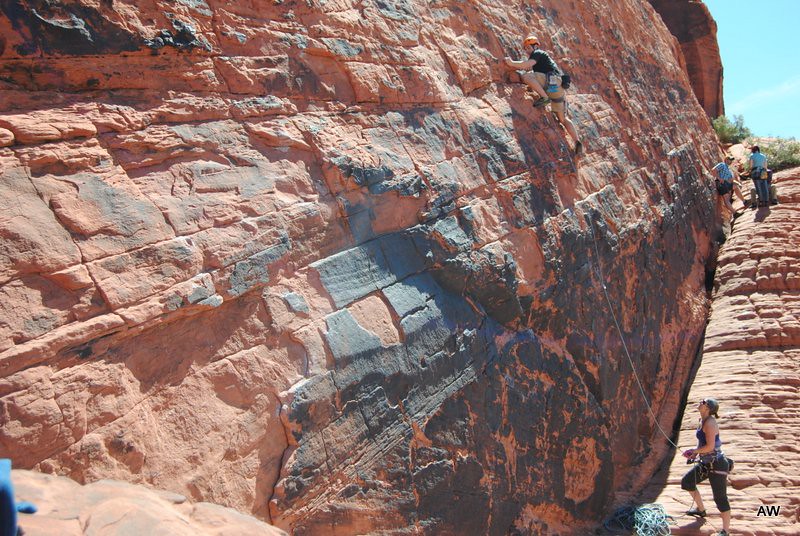 K in Ohio is a super amazing safe belayer.

One thing to note about the Panty Wall is that there is a lot of sun exposure, especially at midday. While many people were able to keep climbing, this pasty Canadian took a nap in the shade of a rock.

One of the fun things about climbing single pitch is that you get to meet a lot of interesting people. The climbs are shorter, so there are more opportunities to chat or share beta. We struck up a few conversations with some people from all over the US. However, what was really awesome is that we met other Canadians… from our home province… from the same city… and who climb at the same gym! And were not aware we would all be there on the same day. (Hey friends, if you’re reading this, I haven’t forgotten that I took some pictures for you and am still planning to post them on Facebook at some point) 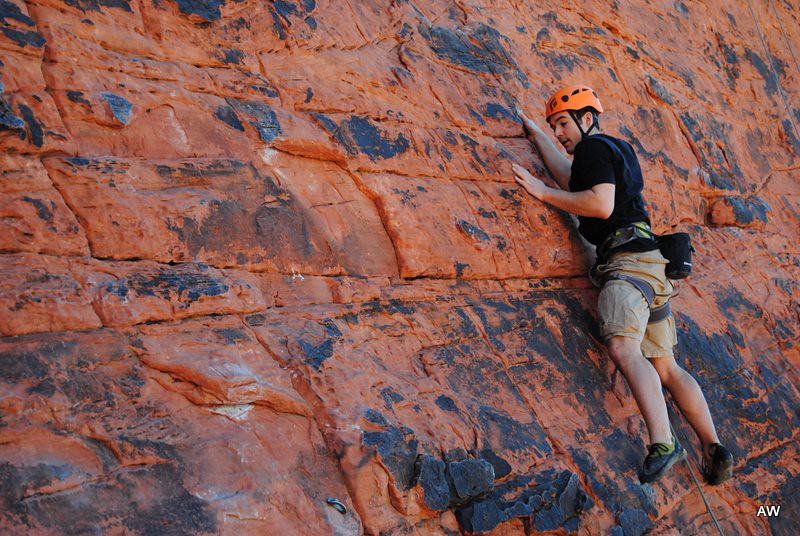 The highlight of our day, however, was trying to get the group back together. We made it back to the parking lot as the sun was going down. We watched the sunset. We took lots of pictures. We chatted. We enjoyed the city lights from a distance. We joked about having to find our own way back to the city. 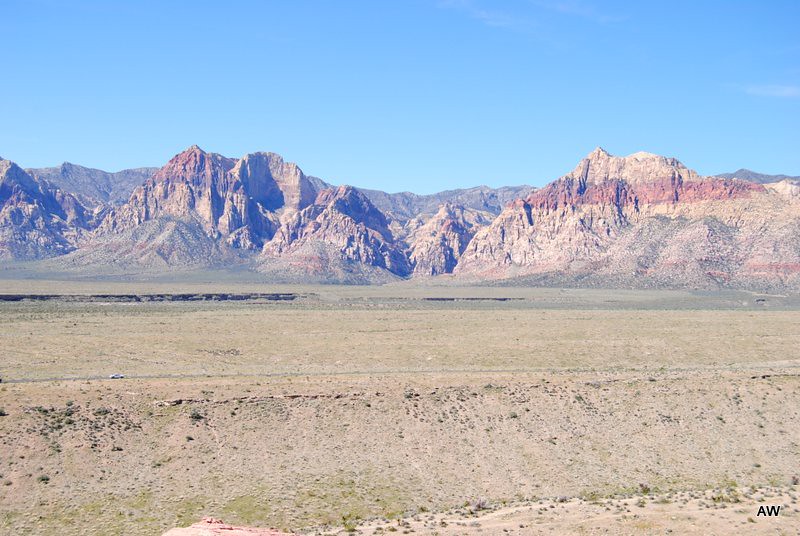 Our view for the day.

When we finally heard from the other group (who were now really late completing their climb), they let us know that the road back to us was closed and we would have to meet them at the park entrance. So we started walking. It was a really beautiful night, so we didn’t mind. I don’t remember who had this bright idea (probably me…), but we decided that we should all turn off our headlamps and enjoy the stars! Sounds beautiful, right? It was. However, I cannot reiterate enough… DON’T WALK IN THE DARK IN THE DESERT. (This is probably common sense if you’re form around there, but it was not fo us.) We’re walking along, enjoying the sights, looking up… when we heard a distinct rattle. RATTLE SNAKE! We panicked. We ran away. And nothing bad happend. We were really lucky. 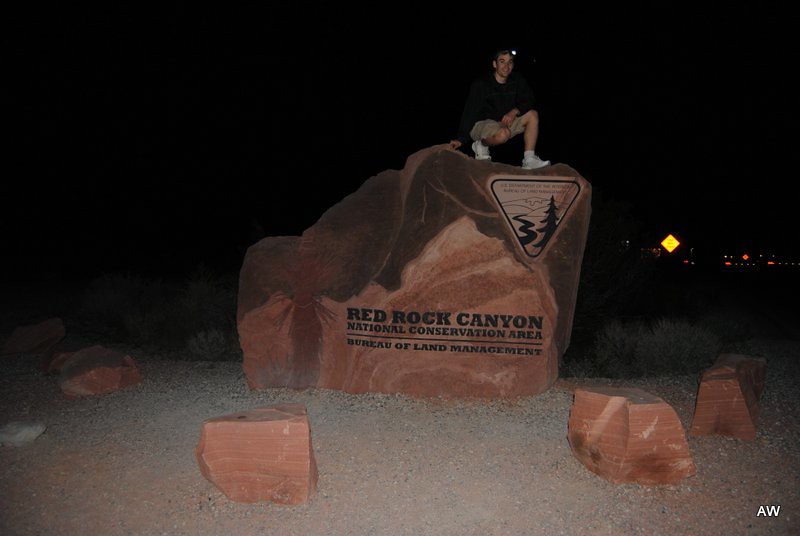 At the park entrance, waiting and trying to find the other half of our group.

Later that evening, we looked up what would be a more appropriate evasive action and how to respond to a snake attack. Thank you Internet.

The lesson I took away from this is always be aware of the local wildlife (and plants) that can hurt you. We were more careful from then on to watch for snakes. We kept our distance from lizards. We didn’t touch the cacti. And we kept our eyes peeled for the illusive Desert Tortoise.

When we travelled to West Virginia months later, one of the first things I did was ask a local (at the climbing shop, of course) what wildlife resided in the area that we should watch out for.

So many things happened on our first full day in Vegas!

We started our day early. Like, even a morning person would say it was an early morning kind of early. Because we knew we were a large group and wanted dibs on a particular climb.

So we dragged our butts out of bed. After arriving on late flight. Checking into our hotel around midnight-ish. And catching a very late dinner. And thus started the trend of sleeping maybe 4-5 hours per night. 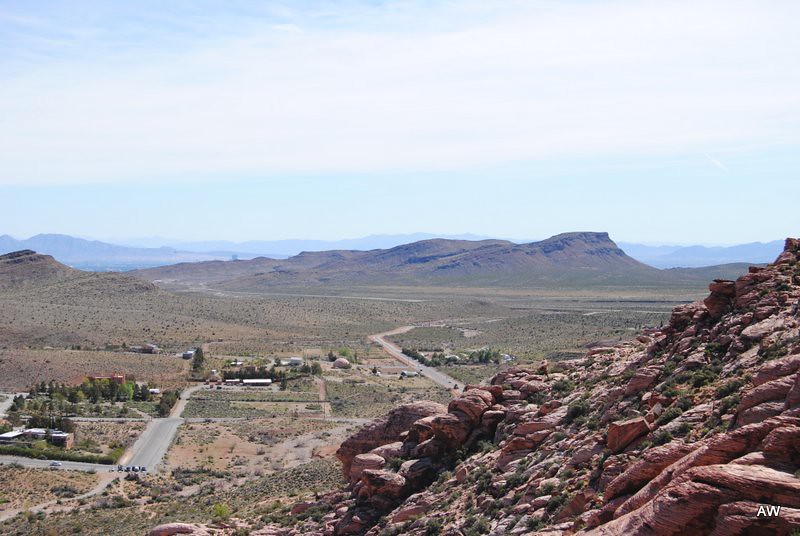 Hey look, you can see the car from the base of the climb!

Some of the group had been to Red Rocks the previous year. And I was warned that it could be scorching hot at ground level and snowing by the time you get to the top of the mountain. So I dressed in layers. 3 layers, like the good Canadian I am. I wasn’t about to risk getting cold.

Learning Experience #1: I forgot about the other extreme. It was about a 45 minute hike to our climb and I was ROASTING about 15 minutes in. I tried to press on and keep up. But I was overheating and slowing down because of it… so I had to stop and take off my warm layer 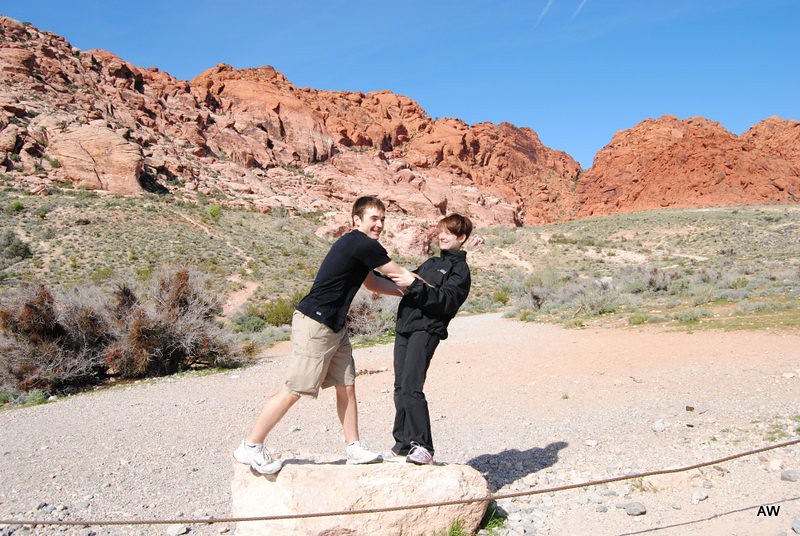 Lesson learned, pack your layers of clothing. Don’t try to wear them all at once!

Learning Experience #2 : How in the world was I going to fit the clothing into my already overfull pack?! Pack light if you’re climbing multi-pitch.

Anyway, by the time we arrived, we found that a group was already climbing Big Bad Wolf. And there was another waiting. So we changed our plan and set up to climb Physical Graffiti, which happened to be right beside it.

Learning Experience #3: Don’t plan any sightseeing, insist on a stop, dawdle, or in any way delay the group in the morning. You might not get your first pick of routes!

We split into a group of 2 and a group of 3. I excitedly fastened my GoPro to my helmet. I was the coolest kid at the crag. 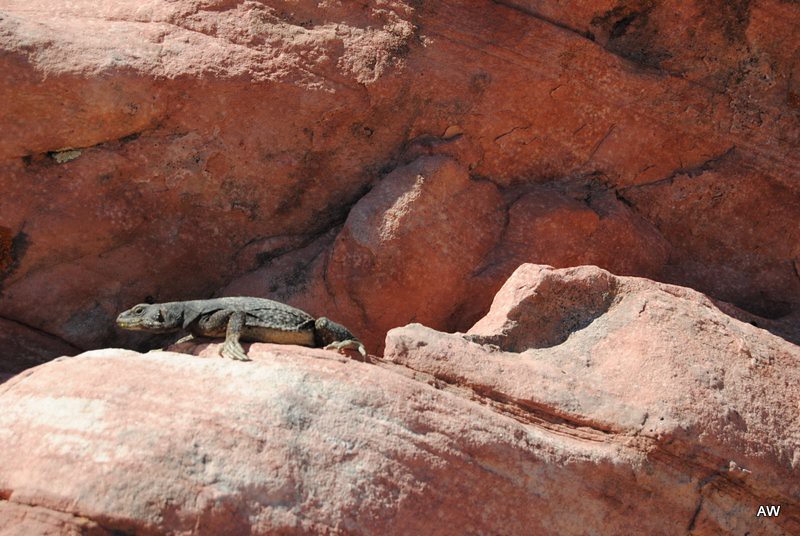 Our lizard friend who was sunbathing at the base of the climb.

Being my first multi-pitch, and a trad multi-pitch at that. I followed. (With some more experience, I hope to lead such a climb some day!) I was giddy the entire first pitch because this climb crossed off many “firsts”: climbing outside of Ontario, climbing sandstone, and climbing a multi-pitch. This pitch was also made super fun by the group next to us who started a sing-a-long. Second pitch was a bit more challenging. The winds got stronger and the temperature cooled off a bit. I could barely communicate with my leader… and the leader that was following behind me. (Next time I won’t make fun of the idea to bring walkie talkies.) The second pitch was also a bit more challenging. Just breath. I had to tell myself a few times when I was unsure of a move. You’re essentially on top rope. You’re safe. From there, we anchored ourselves in for a while and waited for the others to catch up. Then, as a group, we scrambled to the top to enjoy the view! 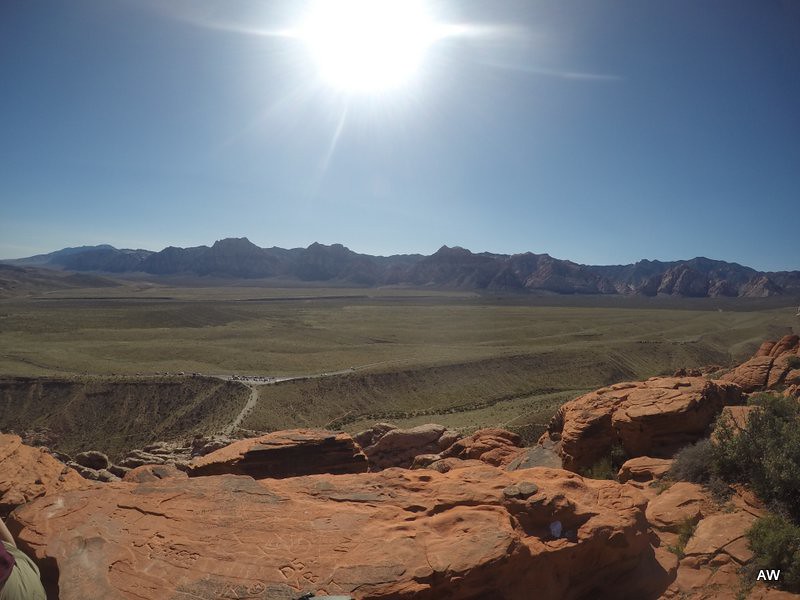 The most amazing view! I can’t wait to go back some day… 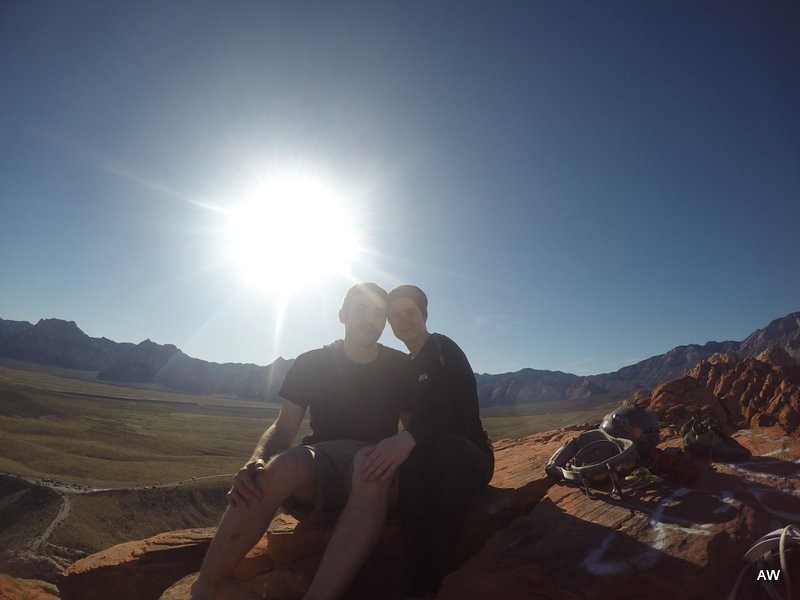 We hung out here for quite a while. We took pictures. And practiced yoga. And some basic acro yoga (flying bird). 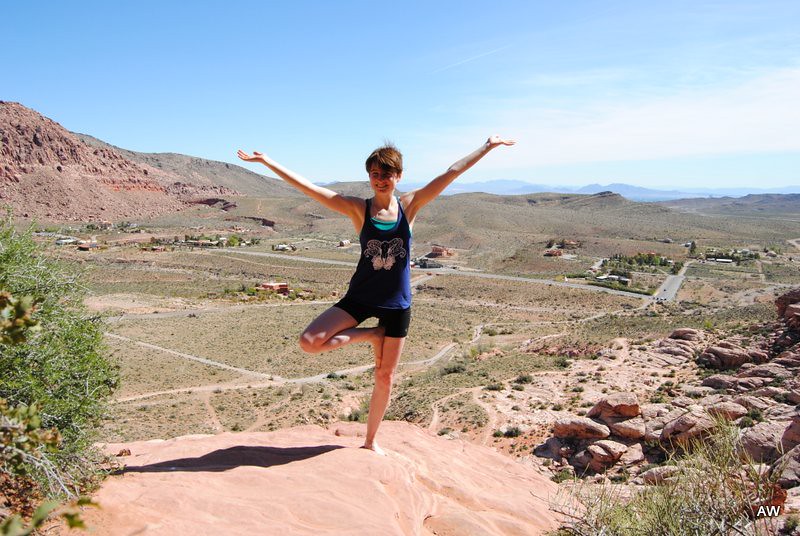 Tree pose on a mountain!

To top off an absolutely amazing day, we picked K in Ohio up from the airport that evening!