Ok, so the title of the Vegas Vacation becomes a bit misleading at this point. Because we decided to pack up the rental mini van and head on to another nearby climbing adventure. Joshua Tree, California! 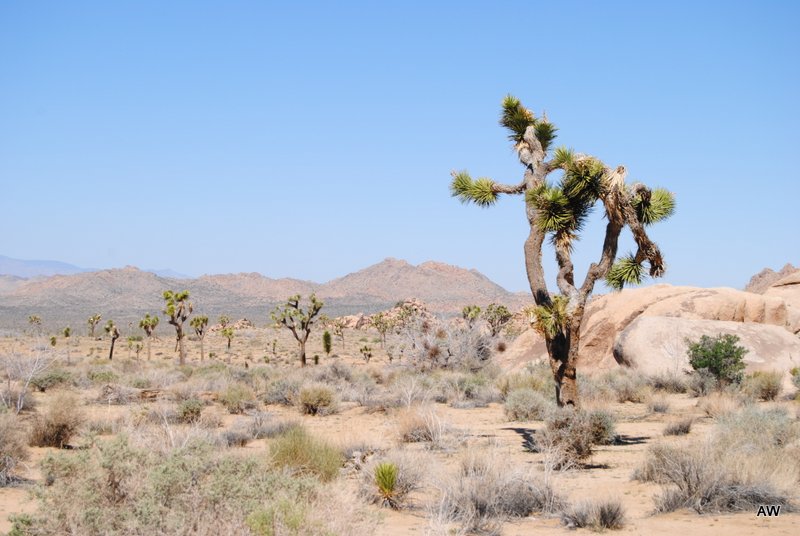 Why Joshua Tree? Because it was on my bucket list. And I pulled the “it’s my birthday tomorrow” card. Thanks friends for letting me win this one. You’re the best. 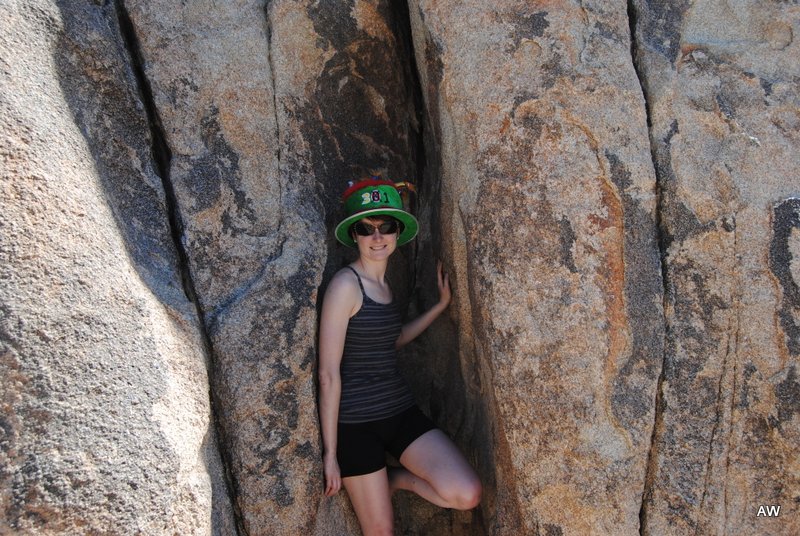 However, one condition of getting my way was that I would have to climb while wearing the (inaccurate yet ridiculous) birthday hat.

First stop was breakfast. We stopped at Denny’s I think. Where I got the free it’s your borthday breakfast. This is when the maple syrup incident took place. If I’ve talked to you about this trip in person, you’ve probably heard this story many times. KinOhio wanted to buy me breakfast (what an awesome friend). When she found out that breakfst was on the house, she offered to buy me dinner instead. And I don’t know how the next part came about, but somehow a bet was made. If S drank the entire container of maple syrup (not the real, Canadian syrup, unfortunately), she would buy dinner for the entire group. Of course, L and I thought this would be a great idea and cheered him on. We watch, impressed and a bit horrified, as S drank the syrup with a straw in one giant but excrutiatingly slow gulp. This event has become legend.

Second stop, the local gear shop. I picked up the climbing guide for the area. The group purchased a few momentos (t-shirts, hand jammies, and the like). And we spent quite a while talking with the clerk, getting recommendations for the best place to climb that would also be easy to find.

I never did catch the name of the place we chose. Or any of the routes that were set up.

But the approach was very notable. Especially compared to Red Rock Canyon. We saw a big rock. We drove to a parking spot near it. We laughed and took pictures of the super hardcore approach of about 20 feet of flat ground. How would we ever make it? Do you think I should change out of my flip flops into approach shoes? Water! Water! I don’t think I can make it. 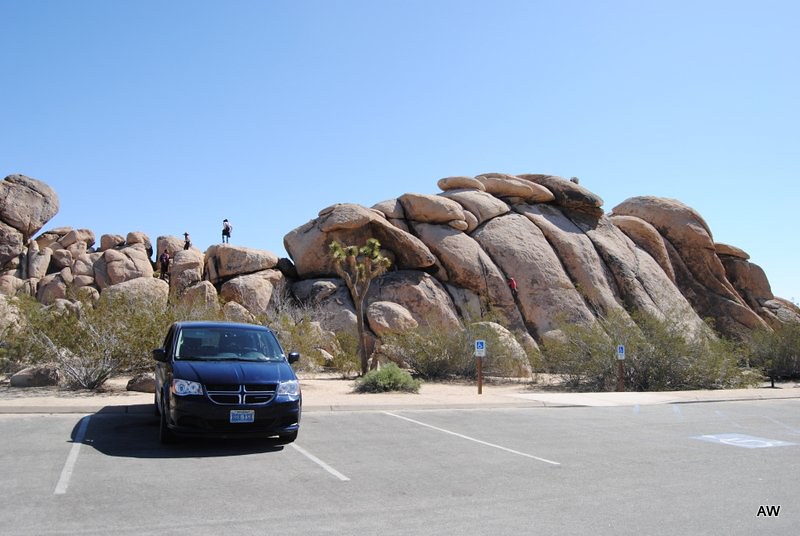 The approach. We weren’t sure if we’d make it across the flat parking lot all the way to the rock.

All jokes aside, this area was gorgeous! We had many single pitch trad route options (thanks to D & J for being fearless and knowledgeable rope guns) and were located next to a field of the namesake Joshua trees.

My first climb of the day, I sported the ridiculous felt birthday hat. J had packed it in our dangerously close to the weight limit suitcase. So I couldn’t refuse. I think I might have even kept the hat on for the second and possibly the third climb. But by midday, it was just too hot. And so the birthday hat made its way back to the minivan. 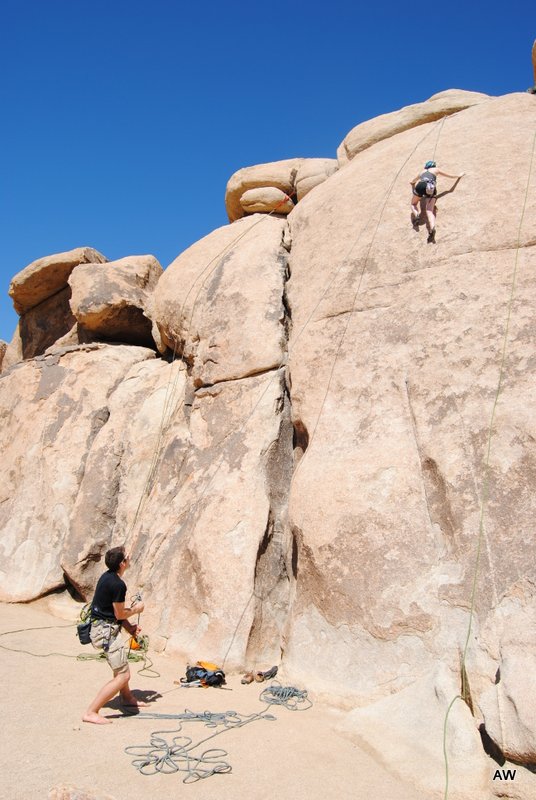 The approach. We weren’t sure if we’d make it across the flat parking lot all the way to the rock.

This was probably one of the trickiest days for me climbing. Not because of the skill level (well, some of it was beyond me). But because of the heat. It had been hot in Red Rock Canyon, but I had been able to find shelter in the shade of rocks. I had much less luck doing so in Joshua Tree. The sun was hot, the vegetation sparse, and the shade from rocks difficult to find and changing quickly with the sun. I reapplied sunscreen more times that I can count. I tried soaking my Buff with water to keep cool, and had to ditch my long sleeve sun shirt. I never thought I’d complain about heat. Especially in the midst of Canadian winter.

At dusk, we headed out. Making a quick stop to practice our tree pose in a field of Joshua Trees. 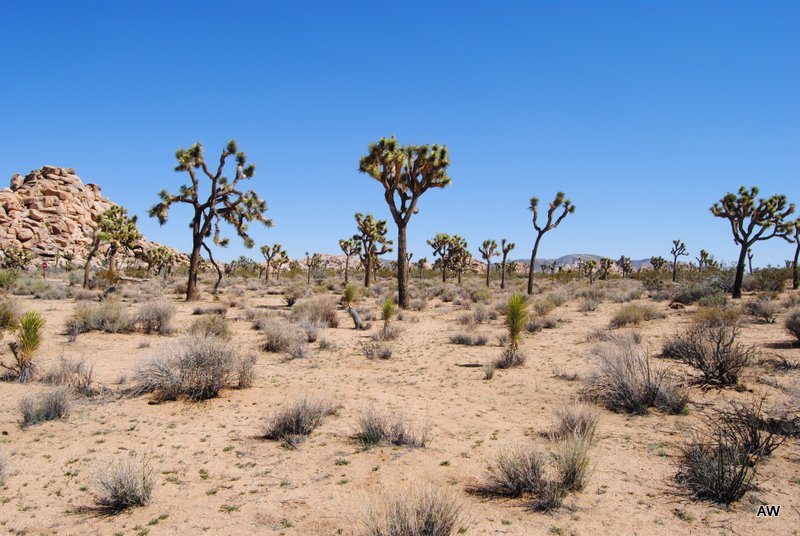 One thought on “Vegas Vacation Day 6: We’re not in Vegas anymore (Joshua Tree)”