Day 3 I was ready for a break from the sun. Seriously. As much as I couldn’t wait to get away from the cold, overcast days of March in Southern Ontario, I wasn’t quite prepared for the sweltering, unrelenting, sunny days in the desert.

So when we were sitting in our hotel room deciding what and where we would climb the next day I insisted on a shady spot. And turns out J and D knew just the spot for us. Black Corridor!

As advertised in the guide book, Black Corridor was a fairly narrow corridor between two red sandstone cliff faces decorated with black markings in the sand. It was beautiful, provided shade all day, and was full of single pitch climbs within our group’s ability. 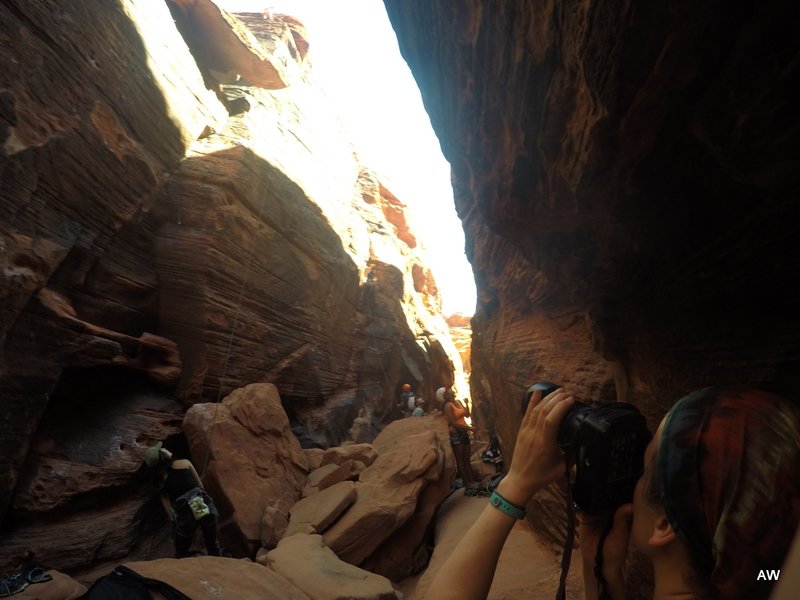 What I disliked about this spot was that it was fairly crowded. It was obviously a popular spot with the local climbers. And that it was fairly narrow if you were to take a lead fall. If you swung out far for any reason, hitting the other side of the wall was a potential (albeit very unlikely) hazard.

Again, I wish I’d written down the climbs that we accomplished, but I think we climbed: 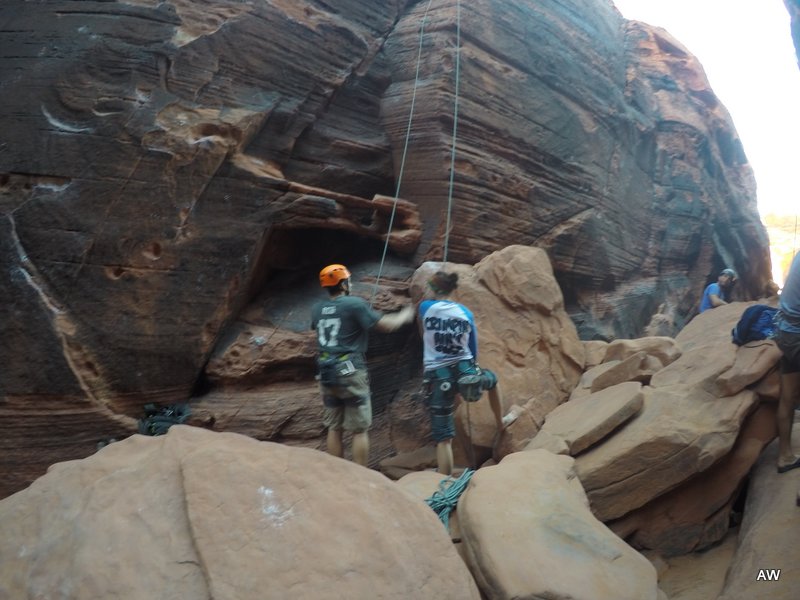 S & L getting ready to climb

But the most unbelieveable (or “unbelayvable” if you read Climbing.com) story of the day comes from a group we were climbing next to. This group seemed to be teaching a friend how to lead climb. Climber was obviously hesitant. Belayer and Observer (I can’t even bring myself to call this person a spotter) were over confident and not taking what, to our group, would have been obvious safety precautions.

Climber was clipped into the first draw and made it to the second bolt. Climber was NOT in a secure place. The “Elvis leg” was jittering. She was telling her friends that her hands were not feeling secure. She was obviously afraid.

What happened next shocked us. Observer starts yelling encouragement and beta. Belayer starts feeding more rope to climber. Meanwhile, climber looks like she could fall any second.

We wanted to look away. We didn’t want to witness a climber decking in the middle of the desert. There was no quick way to medical help. We debated stepping in. We wanted to tell the belayer to take in slack (the rope is dynamic after all, and will stretch if the climber falls), also, it’s better to have a hard catch then hit the ground. But it was like a train wreck or a highway accident — all we could do was watch, jaws dropped, and hope for the best.

I’m happy to say, things worked out for this group. Climber was able to safely clip the draw to the bolt. Then held onto the draw as she clipped in the rope. Again, not an ideal situation but much better than falling. 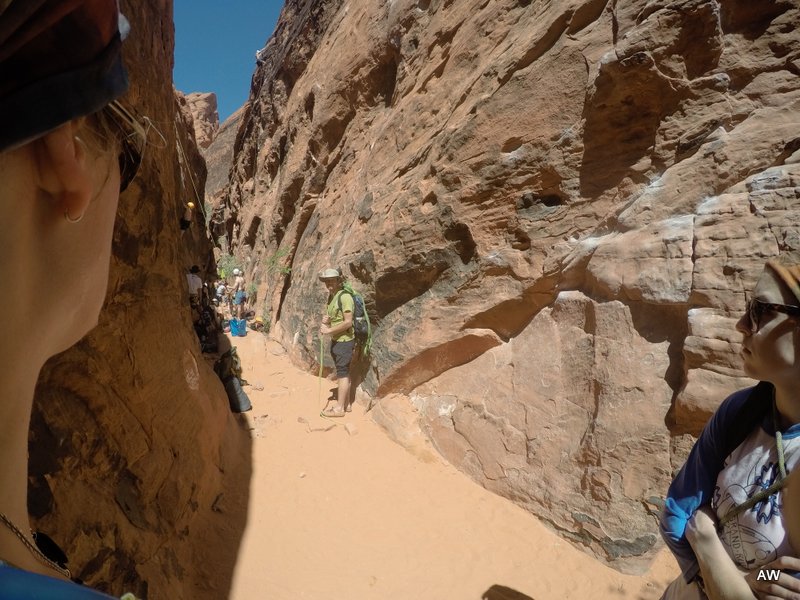 Entering the corridor. It was probably sunniest in the late morning.

We ended up not saying anything to this group. Though to this day I want to educate them on safety measures while lead climbing. What would you have done? Would you interfere mid climb? Would you talk to them once everyone is safely on the ground? How do you advocate safe climbing practices?